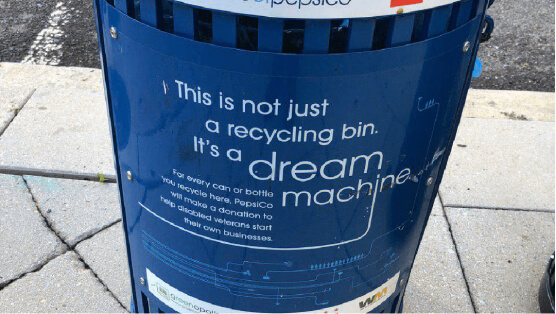 It’s been about five days since arriving in Washington, DC, and it’s been quite a different environment so far. Amongst which have been the cool weather, wide streets and friendly people.

Yet the one sight that left me a deep impression was this recycling bin. Coupled with the briefings that I had over the past week, I thought it was a useful to sum up my initial thoughts and observations:

1) Going beyond the recycling narrative – Unlike other bins which simply advocate for proper recycling, the message here transcends the benefits of the environment but to fulfil the needs of others. In this case, for every item recycled, a donation will be made for another group.

Without talking about the effectiveness of such an initiative, we want to highlight that such messages with an emotional appeal appear to be the norm in the US, and increasingly so in Singapore. Instead of benefiting just the environment, the narrative creates a mutual benefit for another group.

And that’s really what we are learning about ethical leadership. Don’t just do things because it is legal, do it because it is right. And coming from a country where adhering to the rules and guidelines is strictly observed, perhaps we can consider shaping our conversations towards carrying out sustainable practices because they are not just important, but also because it is the right thing to do.

2) The recycling ad/ narrative is carried out by a private organisation – This seems like a trivial or laughable point to note, but drives home such an important reminder:

Everyone needs to play a part for the environment.

For such a huge country with many administrative systems and processes, having different stakeholders to drive the messages might come natural. But in a small country where the reliance is on the government to move things along, it is a timely reminder that everyone – individuals and organisations must be involved. And businesses should also proactively do so to take the lead.

This continues to be an important reminder that my work at Green Nudge to involve forward thinking organisations in making green the norm in Singapore.

Li Seng is currently attending the Professional Fellows Program under the Young Southeast Asia Initiative (YSEALI) in the United States from October to November 2019. These articles are written based on his observations and thoughts during his time in the programme. For more information on the YSEALI, check out the following website.