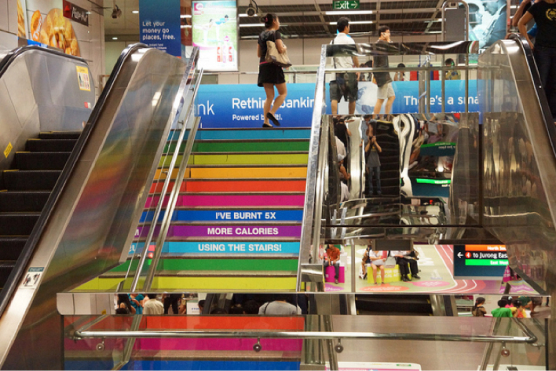 Have you seen these ‘Giant Exercise Machines’ around?

Ever forced yourself to sign up for a one-year gym membership to motivate yourself to exercise but found yourself attending less than 5 sessions a year?

Sometimes, passive nudges such as providing and/or promoting a viable alternative at the time choice can strongly encourage you to pursue a healthier option! Check this out!

In Singapore, the Health Promotion Board placed eye-catching stickers on staircases located within MRT stations in 2011. It was with the aim of encouraging commuters to use the stairs instead of the escalators and lifts. This ‘giant exercise machine’ as described by HPB, provided an easily available and accessible alternate exercise opportunity for daily train commuters.

The two behavioural cues used here are: (1) restructuring the environment (i.e. placing stickers on stairs to increase its visibility and attractiveness) and (2) enablement (i.e. positioning the intervention in MRT trains where there is high human traffic). These behavioural cues consequently motivate us to choose the alternative mode – the staircase. But I guess you might ask the question – why do we become more motivated to perform the desirable health behaviour?

As depicted in the diagram above, the presence of a physical opportunity (e.g. environmental restructuring) can influence our motivation, intentions and eventually lead to desirable behaviour change (i.e. walking up the stairs instead of using the lifts and escalators).

By presenting the positive effect to you, making the choice to walk up using stairs now become a lot more enticing or attractive. I mean, who doesn’t want to look good on the go yeah?

All in all, this is another good example of how a simple tweak in the appearance of a staircase can nudge people to adopt healthier behaviours!