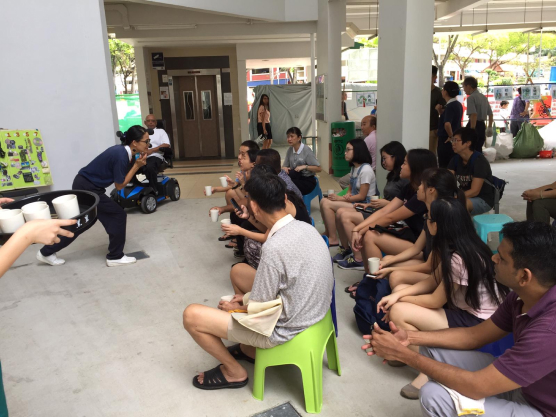 Recycling is often thought as the de facto solution to our environmental problem. The more we recycle, the more we are saving the world. Yet the solution is not as easy as it seems.

What we saw was quite an eye-opener. For instance, we saw how simple steps such as sorting and washing your recyclables made a whole lot of difference. Some items were sticky and stank when we opened up the bags and some bottles grew mouldy because they were stored for a month, which meant they had to be thrown away in the end. That was one takeaway we always assume otherwise: Rinse your recyclables, it’s a lot more hygienic and kinder for those who are helping out.

The sheer amount of recyclables collected was also staggering – in the short 3 hours that we were there, we collected almost 6 huge bags of different plastics! And this was just from one collection point. With 40 recycling points around the island, one can just imagine the amount of plastics, as well as other items collected in just one morning. Fast forward one month, the Tzu Chi volunteers say, and we should be expecting a huge amount of clothes and other items from the spring cleaning and year end holidays.

Honestly, it is easy to claim that we have done our part by just placing our items at recycling bins. But it takes a lot for volunteers from Tzu Chi Singapore who do this out of their own time and money on a regular basis. Many of them do this because they were concerned about the larger purpose of the environment and contribute in their own ways.

Beyond the environmental cause, we also see innovation at play, with technology being harvested to spin recycled plastic bottles into blankets used for natural disasters. We also discovered instant rice, which were invented so that they can be a source of substance during times of need. These are readily “cooked” in cold water in 30 minutes, or hot water in 20 minutes.

We learnt a great deal during this short trip to the recycling point. A lot more humbling and meaningful than we had expected it to be. And we know for sure that it’s not our last time. Internally, we will be making plans to conduct more such trips to get people to be more aware of these efforts. Particulary, we want to allow those who are unfamiliar with the efforts of Tzu Chi Singapore to learn more so that we can all join efforts and green Singapore in our own ways.

Ultimately it’s not about recycling per se, but that our individual efforts come together and that together we can make a tangible (and meaningful) contribution to the environment and community.